Have you seen the end of the world?

A family of three on a month-long road trip to the most remote regions of northern British Columbia enjoy their scenic vacation until a group of unfamiliar men arrives at their isolated camp demanding their food and fuel. During their encounter, Katerina’s husband, Greyson, is shot and her son, Jay, is kidnapped. As Katerina struggles to save her husband and reunite their family, they discover that the world around them has descended into chaos, following an unprecedented disaster.

During their absence from civilization, the world has been bombarded by a massive solar storm, causing widespread failure of communication systems and power grids around the globe. With no help forthcoming from the authorities, police or hospitals, they find they must rely on their own knowledge and wits to fend for themselves.

Meanwhile, Jack, a troubled math teacher on a marathon road trip across America, continues his journey, hell-bent on completing a mission that only he can understand.

Gregory Korpela was born in northern British Columbia. By the age of twelve, he’d cross-country skied in the Canadian wilderness, kayaked white water and sailed through storms on the Pacific Ocean. As a young boy living on a sailboat for several years, he became an avid reader of fiction. As an adult, Gregory has worked as a paramedic with the B.C. Ambulance Service, providing emergency patient care in both remote and urban areas. He has also worked as an industrial rope access technician, performing technical rope work and high angle rescue services. Gregory has focused on technical writing, developing various safety and rescue courses which he also teaches. He now lives on a farm in Mission B.C. with his wife and son, where he enjoys writing and gardening. 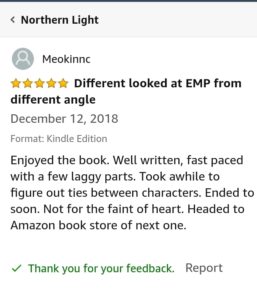